An endless commitment to quality!

Our founder Jim Wofford understands from direct experience in the trucking industry the abuses freight can be subject to. Beaver knows the complexity of proper packaging and all aspects are considered when creating a custom packaging solution specific to the customer’s need.

Jim founded Beaver Packaging & Crating in 1979 on the idea that his company would become the leading neutral source in this industry for quality work. Whether it’s designing a package, construction, proper documentation, proper labeling, or an understanding of the many rules and regulations that originate from difference government agencies and organizations involved with the process, Beaver strives to do things the only way they know how – the RIGHT way.

“After having a conversation with us, our customer should walk away knowing something additional -- even if we don’t necessarily do the job,” said Jim. “We provide personal service – I’m giving you 100% of my time.” 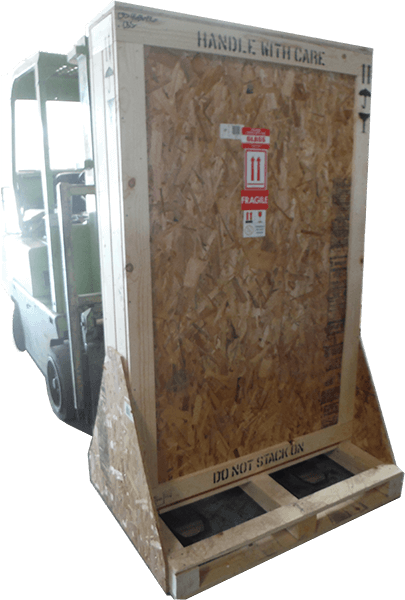 Jim chose the name “Beaver Packaging & Crating” because beaver dams are made top quality – they last forever, and beavers are clean and meticulous workers.

Jim started in the transportation industry at Consolidated Freightways, a nationwide trucking company, as warehouse supervisor, where he was responsible for securing and loading cargo destined for 48 states. He always paid attention to the “good and bad” of cargo security: how certain cargoes would shift in a trailer; and how to handle, rack, store and protect different types of cargoes.

“I explained (to anyone who would listen) that we were the only neutral packaging & crating company in town,” said Jim. “Then we took over a 15,000 square foot building and away we went.”

After succeeding in Detroit and looking at different options around the country, Jim opened a Chicago Operation at ORD Airport in 1991. By then he had earned the trust of several demanding international freight forwarders with headquarters in countries such as Germany and Japan because of his commitment to quality. This gave him the leverage he needed to open doors in Chicago.

Beaver Chicago does most of the same kind of work that Beaver Detroit does but at ORD they also specialize in On-Airport restricted articles repair and re-pack – making sure these specialized products are properly packaged, labeled and documented for acceptance by airlines at ORD, one of the largest international hub airports in the world.

Jim remains President of Beaver Packaging & Crating as he trains his daughter Lisa Wofford to one day take over the business. Lisa has been around Beaver her entire life and came to work for her father’s company after graduating college with a degree in Psychology.

“My father is my mentor" - I work with the attitude that nobody is better than anybody else. I like that we can help people. We’ve helped people get ahead in life and we’ve helped our customers in the process – not only by protecting their cargo but by educating them along the way.”

The Best Team
in Packaging & Crating!

Beaver has several longtime employees. Our employees stick around because they are treated like family and enjoy the challenges their customers throw at them every day.

Here is a quote from one of our long-term employees; “A lot of our customers do not know anything about the business of packaging & crating, but they always come out more educated about the process, because we take the time to educate them. We protect their story”.

From the very first engagement, Beaver has always been an extremely valued partner. They have always provided my team and I with exceptional quality services. No matter what we need Beaver has a solution. We are extremely happy with their services.

The niche services they provide around custom packaging, handling, and shipping are hard to come by, especially from a local provider. Their ability to work with dangerous goods and hazmat is icing on the cake... Highly recommended!

Customer service was first rate prompt delivery and very professional throughout the entire process you guys are the best!

I had some things packaged and shipped overseas and everything went perfect I don’t usually write reviews but these guys deserve it. Thanks for the great service!!!

Get in touch with us.

Beaver Packaging & Crating has the solutions for all your packaging & crating needs.

Wooden crates or boxes designed and built to the specifications of your product and price range. Beaver Packaging & Crating has the solutions for all your packaging & crating needs.

Beaver will properly load products into any ocean container including open top containers when necessary. This includes strapping, blocking and bracing and other custom loading measures to ensure safe transport.

On-Site Packaging is usually recommended for fragile products or when it is a requirement of the Letter of Credit between the seller and overseas buyer. After visiting the customer’s location and viewing the product, Beaver can pre-build much of the materials required.

Beaver will properly load products into any ocean container including open top containers when necessary. This includes strapping, blocking and bracing and other custom loading measures to ensure safe transport.